Am I crazy or were multiple mountains and features removed from the demo? I would rather play the original demo if that is the case!

Reply
The Indie Buffet3 days ago

Absolutely a FAN of this game <3

Hey there, we would love to exhibit your work - Can you reply to our mail or get back to us via dm at twitter.com/sp4c31nv4d3r?

This game was so fun!! I just completed the demo and hope they're going to turn it into a full game <3 The world is beautiful and the climbing is really fun! Two little improvements I would suggest are making the frog climbing arms look more like frog arms, and then towards the end when it asks you if you want to stay in the town or leave, I couldn't figure out how to get the selection to work. I would've liked to stay in the town and do the other climbing routes! Awesome little game tho! 10/10 :D

Dont know if anyone else is having this issue but as soon as i get to the 3rd mountain and complete it, it gives me a decision to stay or leave but i cant et past that, it doesnt take any inputs and i cant complete more than 3 mountains in a save, other than that, loved your game

This game is so good, but I have a big problem. I have an RTX 2060 and it can't make more than 70-80 fps, sometimes not even 60. In standart case this wouldn't bother me, but it's temperature even goes up to 80C and at that point it's getting noisy and ofc this temperature not too healthy either. I don't know what's the problem, I'm not a developer but... Does this game has LOD?

i really liked it until the traffic lights, I honestly think its an annoying gimmick that adds nothing but a boring wait as you climb, otherwise, its great

This his honestly beautiful, in terms of gameplay and vibes, as a somebody who's climbing sometimes this is enjoyable, dynamic, smooth,  reminds me a little of the chill vibe of Short Hike. Love the tension you get when your up the mountain and have to carefully click your hands while the boulder dissipates! Anyway, one thing I would add - a rogalo to glide off the tops!!!

Keep up the great work!

Really fun game and great concept. I madebit to Mt. Tree. I quit the game to rest and came back but I never knew there was no saving. Please add saving or cjeckpoints to the game so our progress will not be deleted and restart the game.

Reply
Kidd_Ichigo335 days ago(+2)
Did a two-parter on this game and was thoroughly impressed! I love seeing new and unique 3D-Platformers on Itch and this one really has a great vibe and feeling to it. I wasn't the best at handling the physics, but I still had a great time flinging myself around the mountains! :D
Reply
TubClub335 days ago(+3)

thanks for playing! I really enjoyed your playthrough 🐸

any news on updates or a full game anytime soon?

Fun and intriguing game with a beautiful art style!

Found a pretty fun and useful glitch with the glider, right when you land if you spam space and move your mouse you start floating up into the air, works better if you shake your mouse but has less control.

I hope we can save our game in the future! Other than that, it's a great game <3

Wonderful. When I have children, I would give this to them as their first game to play. It's a climbing game with no frustration.

Surprised me constantly with the everything really. The size, the characters, the alternate routes, the additional abilities, A PLOT??

Best of luck with this project, seems like you've something special on your hands. :)

this game is so amazing! Really wish you could save though :( I quit and started again and my progress was all gone and realized there's no save. I tried the harder mountains and couldn't tell if I was missing items or not understanding a mechanic? Still tho, really really great. The climbing is so fun, it's beautiful and I love the music.

can we get a linux build please? ;-; thanks

I really really enjoyed this art piece. Great gameplay, awesome graphics and great music too, i got stuck too long on some of the routes, but that made it perfectly challenging. Thank you, please keep making this awesome experiences.

this crashes when i open it (IM ON MAC)

this game is goddamn osm faaaaaaakkkkk y is dis so gooood

is there an fps limit because my computer fans spin hard when playing this, would love to play the rest of it otherwise

Reply
YEET IT LIKE YOU MEAN IT1 year ago(+3)

This seems to be very...

I really love the vibes from this game! It becomes quickly hard (I'm terrible at clicking a precise moving spots on a timing), but remains fun enough to never feel frustrating. I had an amazing time playing it!

Wow this game is so cute!!! I really didn't expect such a fleshed out  little sandbox for a "demo"!

Everything works really well together. After getting immersed, the visual language makes climbing the routes accessible yet challenging, but it always gets my palms sweaty once the peaks get snowier and the stakes get higher (and you find little frogs with campfires and tents encourage you). It ends up really feeling like a little mountain adventure! I love the little details everywhere.

I really like the visuals / color palette too, it's super warm. The cloud layer is really animated and pretty, and I love looking up at a mountain where the colors just s t r e t c h into the atmosphere.

The dynamic music for each area is really nice too. It's really poppy and fresh, and I like how it jazzes up and simmers down when I would make it up and fall off a mountain (and little flourishes in the music when you walk by things are peak sound design).

It's just all very well-done! All the little props, the tight design, the dialogue and UI.  Very cute, 10/10. If this is just a demo then I can't wait for the full game. :)

I love the art style; it has a really unique and vibrant look to it. The music is also similarly great and helps to set the mood of the game, it’s energetic enough to make me want to climb mountains but not to the point that it’s distracting or invasive.

I appreciate the number of options available right from the start of the game, players can tailor the game to their preferred playstyle quickly and easily. Adding in assists for struggling players is a nice touch and helps broaden the game’s appeal.

The menus are well made, they have a lot of character and fit the game’s atmosphere.

NPCs are fun to interact with, the unique sounds and animations they have help to portray their emotions well.

The hanglider is a lot of fun to use and it made me even more keen to climb up high so that I could get some great airtime and admire the view. It also made getting around the world when at ground level even more fun, climbing up small hills or buildings to zip to where I needed to get to faster. It’s great fun.

Golden mushrooms made for a good collectable, I was keen to get as many as possible and fully upgrade my character. It definitely helped me see more of the world than I might have otherwise.

The extra challenges were a nice addition to the general gameplay and helped give the game some additional variety during play.

When you receives mushrooms for completing challenges it would be good to have some kind of small animation to reassure the player that they’ve received their mushrooms like they normally do when picking them up in the environment.

I felt it was strange to have notes in journal about the binoculars before you get them in the game, it felt somewhat like a spoiler.

There’s a spelling mistake with the white frog who delivers mail, he says ‘I am the fasted driver in the whole area’.

The radio can sometimes be shaky when held out.

When climbing Mt Croob, the game said I had done all of the stickers when I had only done two – the blue and yellow ones. I had done the blue first, then the yellow. Then when I completed the mountain and got the red sticker it didn’t show the blue or yellow one when the mountain complete prompt appeared.

It might be an idea for you to change the text after completing the pumpkin trial and can receive no more mushrooms to ensure players don’t retry it and get surprised when they receive nothing.

I sometimes found that I couldn’t pull out my glider during a fall or jump when I pressed the correct key.

I think that a SFX for you burning your hands on the traffic lights might be fun and to reinforce that you can’t hold it.

I found a frog that was stuck in the wall – the one who tells you that Mount Thunder will change you if you complete it.

I found that the cloud level can sometimes obscure your view up the mountain in what I felt might be an unfair fashion.

There’s a spot where a mesh hasn’t been properly snapped to the floor. 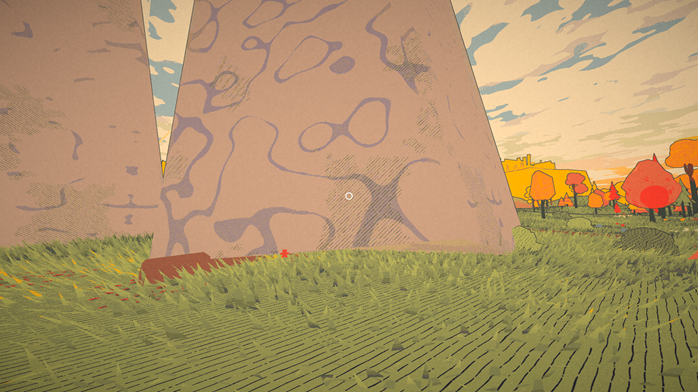 You’ve done a great job on this game. It’s got a tone and atmosphere that makes it feel original and the climbing and exploring is great fun. I’ve recommended it to friends, and I will watch your progress with great interest.

I cant get in the app, it says I do not have permission. please help! im on Mac!

cd [the app folder path]
for example: cd downloads/mac\ build
or right click on the folder containing the app and click new terminal at folder.

if that doesn't work put sudo in front.

You should then be able to double click the original app.

The game should be laggy but once you change to a lower resolution it should work fine.

Absolutely lovely demo!! the ending was really ominous tho O_O

not support for AZERTY keyboard ?

You can at any time change the keyboard layout (on windows at least), either with the icon "FRA", or with shortcut LEFT SHIFT - LEFT ALT

I also appreciate how the visuals are simple yet beautiful.

I want to speedrun it!

Very cool, interesting, challenging and joyful! Could you also export it for Linux? It work’s flawlessly with wine but still

an amazing game!! I've just been playing the demo again and again. I even madaged to glitch myself onto the rock wall and walk over the broken bridge! it was really fun exploring the areas- even the unfinished ones and the story (spoilers!) confirmed my suspicions about those radio towers not being put there with good things in mind.  I also found this floating tree near the ghost lol 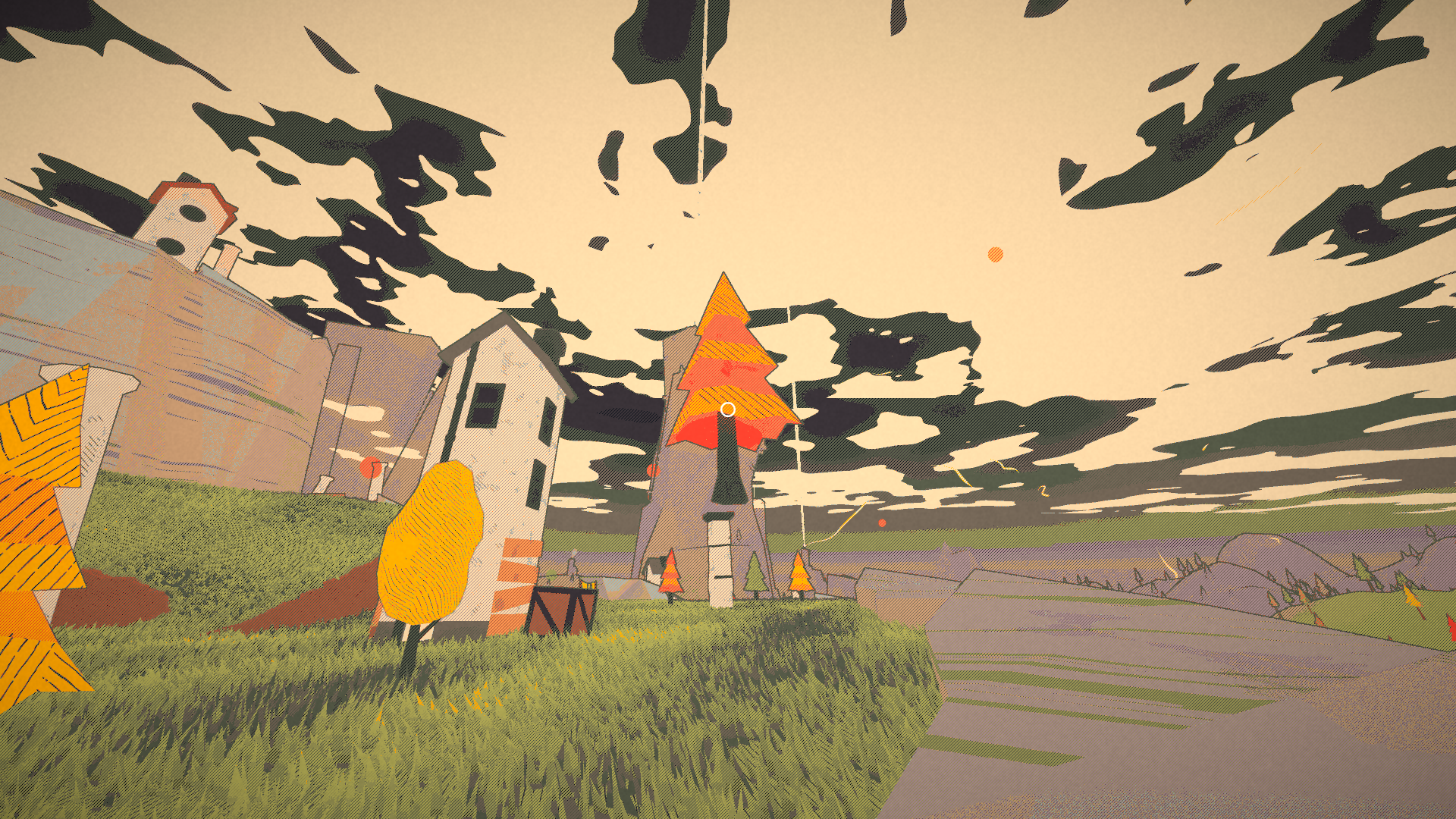 Though my PC does get loud when I play, so its nothing for a weak cpu. I'm hoping that maybe we'll even get to do sidequests for the other Froggies when the game is completed.